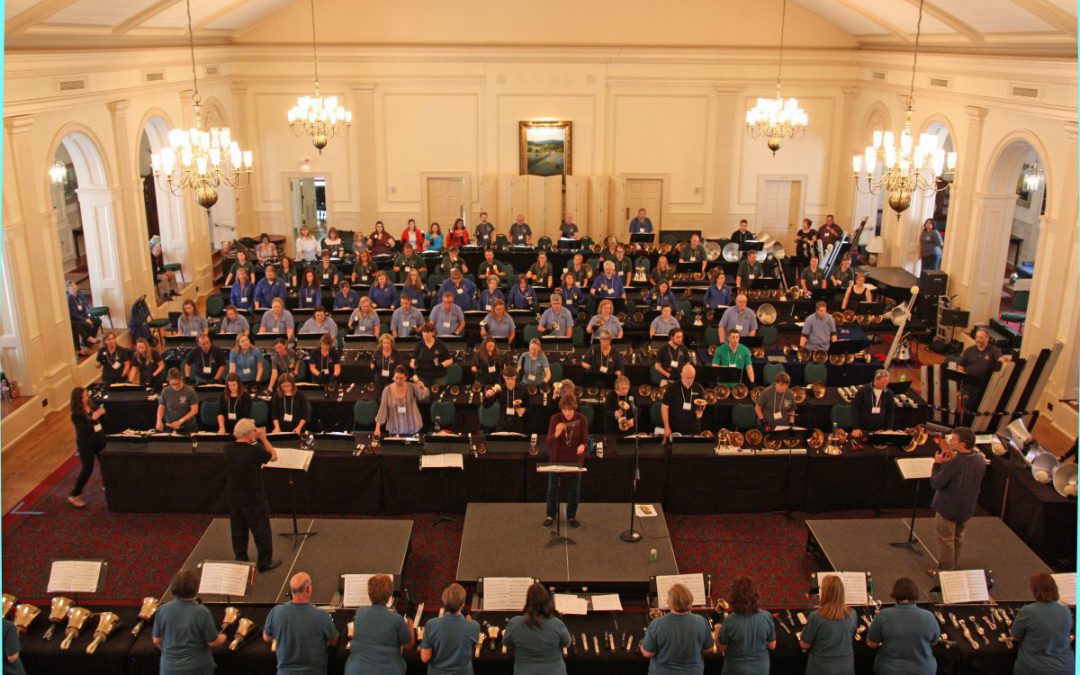 A Different Take on the Handbell Event Model

Stop me if you have heard this one… “Let’s get a bunch of ringers together from the area, pick some great music, add a great clinician to learn from through a mass ring experience, and give a concert”. This is a successful model thanks to talented organizers and the breadth of excellent clinicians who provide outstanding teaching. With this traditional style of event, the focus is on individual improvement through exposure to the teachings of the clinician in a mass participation setting. While this model has many benefits, there is another concept with an alternate purpose and outcome to consider. This article offers a group centric approach as a handbell event…

A Texas Bronzefest is the brainchild of Bob Avant, director of the community group The Austin Handbell Ensemble and the college group, The Baylor Bronze Handbell Ensemble at Baylor University. He observed that there were no opportunities for regional events intended for community or college groups in a way that would expose the groups to multiple clinicians. In an effort to provide this and to emphasize relevance, he developed this event to gather these groups and to bring clinicians in to work with each ensemble on music specific to each group.

The Texas Bronzefest model provides whole ensembles with the opportunity to learn from multiple clinicians while using the music that is in current preparation within each group. This, along with a few twists is explored here.

Handbell ensembles participate as full groups in the event and enjoy many benefits. As the purpose of this event is to improve each participating group, the selected music being addressed with a given ensemble comes from its own repertoire. This focused time with guest clinicians can accelerate the pace of preparation and development of these pieces and the development of the ringers’ skills. Additional benefits include increased camaraderie within and between ensembles, teamwork, group pride, and exposure to peer ensembles. Options: Given the possibility that a group wishes to participate but has a missing ringer for the event, an effort to locate potential quality substitute ringers can be made. There could also be an additional group created just for the event that is composed of individual ringers whose home group is not participating.

The number of participating groups influences the logistics requirements, the ability to add additional outside clinicians, and the registration costs to cover expenses—too few ensembles and it increases the cost per group; too many causes difficulty in locating a suitable venue. A sweet spot seems to be 8-12 groups, although adjustments could be made for numbers outside of this range.

The original event in this format, A Texas Bronzefest, targeted community and college groups; however, this format could be utilized by church-based groups in the same way.

Each group is assigned to its own rehearsal space.

Each participating group remains in its space for all learning sessions, while the clinicians travel between rooms to work with their next ensemble. There will be one transition move to relocate the individual groups to the final concert location.

The leadership of each ensemble provides pertinent information to each clinician.

Directors are asked to provide information on music titles, along with specific areas of need, to each clinician in the weeks prior to the event. In this way, each ensemble customizes their own teaching and learning experience to address their specific needs in order to make the event 100% relevant and uniquely beneficial.

Each clinician is expected to review these requests ahead of the event.

Outside guest clinicians (as many as the budget allows) and participating ensemble directors serve as the clinicians on a rotating basis.

Due to the rotating schedule of the clinicians, ensembles experience a new clinician for each learning session.

Clinicians serve two purposes. First, they address the aspects that each ensemble director had requested through communications made prior to the event date. Second, they address what they observe as needs of the group using their experience and perspective as a guide. In both cases, the clinician shares their expertise in teaching techniques and in musicianship with the groups. In addition, an ensemble could use part or even all of its time with any clinician to interview them about current group concerns in an effort to improve and develop the ensemble.

One of the keys to success of this format is the utilization of participating ensemble directors as additional rotating clinicians. Involving multiple clinicians provides a variety of teaching styles and is likely to make more meaningful connections with the ringers.

While this event could work as a one day event, it would be best suited as a day and a half in length.

In a sample scenario, the event can establish move-in time as noon on Friday with the welcome and orientation talk taking place at 1 p.m. The first note of the first learning session can then begin by 1:30. This affords the possibility of at least three learning sessions for the rest of the afternoon. A social gathering of all participants could take place that evening to increase camaraderie and the sharing of information. Saturday can hold between three and five sessions, depending on the inclusion of an optional mass-ring component. The concert would be completed by about 6 p.m. with move out and travel to follow. The day-and-a-half event offers a significant benefit of increased learning opportunities in exchange for the effort and cost to attend.

Learning sessions with a clinician are at least one hour in duration. This pacing seems to work well for this event, and it builds in break times between sessions as the clinicians rotate to the next group. The result is that the ringers can make it through the day with some freshness.

The event is best planned to take place about 3/4 of the way through the concert preparation season.

This timing provides each group the opportunity to have already prepared its performance selection for the final concert. It also allows some meat-on-the-bone for clinicians to work with in the remaining pieces in development. Finally, enough rehearsal time remains before the group’s end of the season concert to apply the learning into their final preparations.

The Final Concert—details and options.

The layout needs for the final concert space are similar to a mass ring based event.

The final concert includes each participant ensemble performing one selection as their feature performance piece from their position in the room layout.

Since the layout supports it, a mass ring piece could easily be added as a traditional component as a grand finale to the concert and the event. After all of the individual ensemble work, performing with all groups combined adds energy and excitement to the event.

The most recent event invited three outstanding guest clinicians: David Harris, Carolynne Mathis, and David Weck. All participating ensemble directors were in the clinician rotation as well. Each group was scheduled to see two of the headline clinicians and five more peer directors/clinicians during the seven one-hour-long learning sessions.

Venue selection is crucial to the success of the event. Each ensemble needs a large space with enough separation between each room to keep rehearsal sound from overlapping. In addition, a very large space is a necessity for the final concert that also includes seating for audience members. A Texas Bronzefest 2012 was held in a church education building with the fellowship hall serving as the final concert location. The second event in 2017 was held on the campus of Baylor University in the Student Union building, which was a little larger.

As part of an effort to help defray costs, we advertised locally to encourage attendance at the concert for which we charged admission. In addition, and more importantly, we advertised and sold All-Access Passes to allow for non-ringing observers from the general handbell public who were allowed to roam in and out of any of the sessions for the event. This offered a valuable opportunity to observe these clinicians work with the groups at a nominal cost.

Early steps in the planning process (over a year in advance) included reaching out to potential participant groups for preliminary interest, the identification of potential primary and backup venues, the development of a preliminary list of expenses and a preliminary budget. Next, clinicians were identified and contacted for availability. Local hotels were contacted early to locate a blend of quality and pricing, with contracted group rates set for the event. Refinement of the details and the budget took place and official invitations to participate were sent. Early commitments are encouraged in order to make important event decisions. Much of the remaining time leading up to the event was spent in further refining the details, problem solving and adding final touches. It takes a team to execute a successful event.

We sought and received a mix of financial support, including donated items from various vendors (local and national) that provided fun opportunities as door prizes which were made part of the gatherings for announcements.

Is it all worth it? Here are some quotes from past participants and clinicians…

“We left Texas Bronzefest 2017 with the same feeling we left with in 2012: that this is the best event ever, and we can’t wait for the next one! This one event is packed with everything: the opportunity to work on your own concert repertoire under the direction of some of handbell’s best directors, the chance to meet, listen to and perform for other people from our state who share our passion, and the chance to perform some great music with them. It is truly everything packed in one package!”

“My college handbell ringers returned from A Texas Bronzefest not only playing more skillfully and musically, but with new enthusiasm and insights into the world of bell ringing. Hearing excellent ensembles from across the state and working with outstanding clinicians was an amazing experience. I also grew as a conductor and was introduced to new repertoire, new techniques, and new ways of organizing my ensemble. Three weeks after this well-organized festival, our spring concert was the strongest ever and interest in our ensemble has increased.  My ringers are eager to participate again!”

“A Texas Bronzefest was one of the most creative events I’ve participated in. I loved the opportunity to work with individual choirs as well as conduct massed ringing. The groups all benefited from having a variety of clinicians work with them and we clinicians enjoyed the opportunity to get to know ringers on a more personal level and dig deeper into some of their repertoire. Kudos for thinking outside the festival box!” 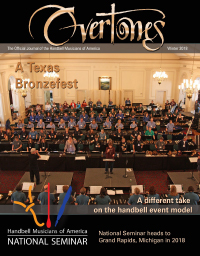 In the Year Ahead

Learning from a Special Needs Ensemble

Tell Us About You

A Texas Bronzefest
A different take on the handbell event model

Now You See It…
Keeping Your Group's Money Safe