Moving Away from the Table: The Art of Handbell Theatre 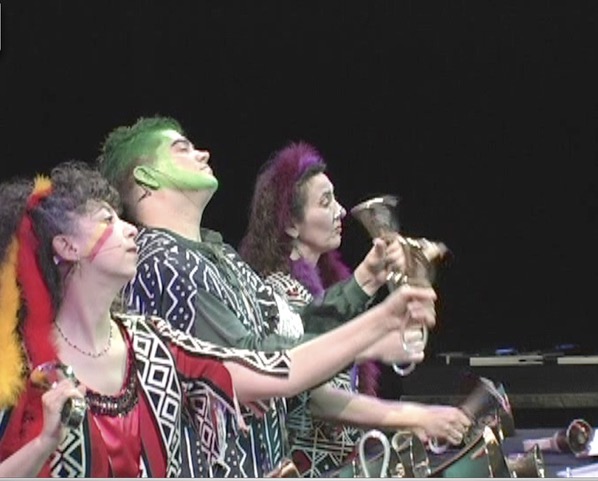 First, let’s talk about what Handbell theatre is, and what it is not.

Handbell theatre uses music, drama, and movement to tell a meaningful story, or evoke a strong emotion. The musicians should be characters invested in the story, who relate to each other and to the audience. Most of all, handbell theatre should be about something besides the handbells themselves. It shouldn’t be about “let’s see what this piece we all know sounds like on handbells.” Think of it this way: It’s the difference between a standup comedian telling jokes, and a comedy film where we fall in love with the characters, and journey with them.

As I write this, I realize the only way to fully explain handbell theatre is to tell the story of the evolution of Campanile. Many of you may not have heard of Campanile – we retired in 2006. But our story is the story of the creation of Handbell Theatre, so please bear with me.

Campanile was formed in 1987 as a handbell group that wanted to play music not usually associated with handbells. The first pieces I remember playing were by Paul Desmond and Oscar Peterson, which were revolutionary ideas at the time. Not so much now, partly, I hope, because of us. But at the time, it was crazy. We even had handbell experts come up to us and say, “You can’t do that.”

I was the only person who had no prior handbell experience. But I did have tons of theatre and dance experience. It was only a few months into the process when the group asked me to add choreography. I think that’s where the idea for handbell theatre started.

As our group evolved, we would create a show, tour it for a couple of years, and then build a new one. I’m going to talk about three of those shows – the first, the middle, and the last. Those three shows track the evolution of handbell theatre from the very first baby steps, to what it became by the time we retired.

Our first full show was basically a collection of popular tunes that you would not expect to hear on bells. We all danced as we rang, but we were still behind a wall of tables. Between pieces we basically did standup comedy. We called our first video Campanile in Concert – because we were still lacking a concept – we were still just doing the coolest stuff we could think of on bells.

It all sounds pretty tame now, but even then, we made some huge departures from what the rest of the handbell universe was doing at the time: We did not drape our tables, so you could see our legs; we danced; we had no conductor; we wore sexy costumes instead of uniforms; we played popular music, not handbell or classical music; and almost from the very beginning, we always had a drummer. A real drummer, with a whole kit, not one person with a tambourine now and then. Because you can’t play rock n roll without a drummer. Period.

However, in my mind, the most important thing we did from the very beginning was to create a relationship with the audience, and characters for ourselves. It might have been the very first time handbell musicians had ever made eye contact with the audience. And we did so “in character” – basically we each became our own favorite rock star and performed as that person.

Please note, I didn’t say “we pretended to be rock stars.” I said, we “became” rock stars. It’s the difference between being Lady Gaga and being Weird Al pretending to be Lady Gaga. Both are entertaining and valid. One is Theatre and the other is Parody.

That first show was the very beginning of the creation of Handbell theatre. We memorized our music, so we could interact with each other and the audience, added choreography, and started the process of creating characters.

Next, we created a show that had a single cohesive theme – Nocturnal Journeys. We changed our standup routine into a spoken word story that moved the show along its arc. After the first “Standup Show,” we never ever talked about the bells themselves.

This is also when we changed our table configuration. We had always performed in a U or an L shape, but we were determined to break down the barrier between us and the audience. For the Nocturnal Journeys show, we built eight 3 x 3 tables on wheels, so that the configuration of the tables could change between every piece, and so we could stand next to them, not behind them. This opened up whole new dancing and relationship opportunities. Once you break that table barrier, a whole lot is up for grabs!

That second show added to the evolution of handbell theatre: No table barrier, a cohesive story, more dancing, and more character. But the biggest step towards handbell theatre in this show is invisible, unless you know where to look for it.  This is the show where we came up with the concept of “interstitial” pieces – smaller pieces that could be played with two or three people, so that everyone else could change their bells out, or do a costume change, without losing momentum in the show. Nothing stops a show colder than making the audience wait for you to set up, even if you have a talking head in front. They know you’re just stalling for time. We wanted those interstitials to be an integral part of the show, so the audience wouldn’t even realize that the bell changes were going on.

Our final show, Rites of Sound, finally brought the whole thing together. This time, we wrote an entire script before we picked a single piece of music. Rather than telling stories this time, we would become the characters in the story, and each song would move the story along. Now movement was not only an accompaniment to the music, it was actually integral to acting out the story. 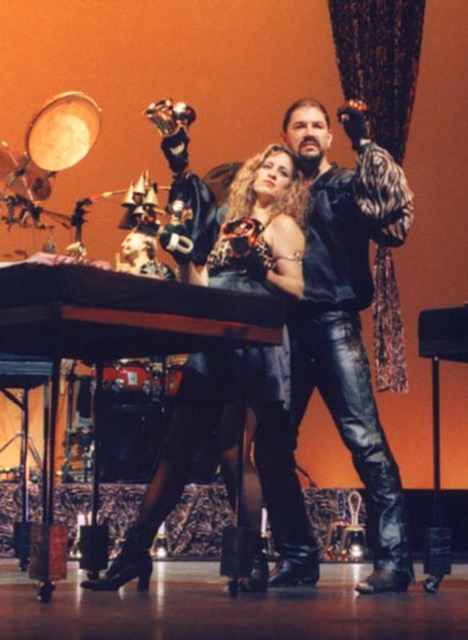 Kat and Roger in “Rites of Sound”

You also can’t achieve handbell theatre without compositions and/or arrangements that are suited to it. If you try to do handbell theatre by ringing standard stacked, chordal, handbell music, you are likely doomed to failure. Most handbell groups play their set chromatically. Some might move a few bells here and there. But to really do handbell theatre, you must assign along musical lines. It’s hard to be entertaining while holding two bells at your shoulder, waiting for the line to get to you. It’s also much, much easier to memorize assignments that are drawn along musical lines.

For example, check out this clip of Campanile playing Barock, from Cirque du Soleil.

Notice that the melody starts out being played by three people. About half way through, I take over playing the “brass stingers,” Kat & Kristin take over the melody. The bass is being played by Roger and Ron. Kris is the only one who moves back and forth between bass, harmony, and melody. This makes for exceptionally clean lines; a musical line that the audience can identify visually. It also leaves time and space for the performers to dance.

So, how do you write/arrange for handbell theatre? That’s a whole other article. Or, more likely, a couple of days in a classroom. Drop me a note if you’re interested in writing, arranging, or performing handbell theatre.

The underlying visual concept of our final show was to create movement across the stage as much as possible. No longer would we be chained to dancing in place, next to a table. So, we chopped up our assignments into modules. Play the melody for 8 bars. Take three bells from here, put them on someone else’s table, dance for a while, or play another instrument, pick up bells from somewhere else, and start ringing again 16 bars later. Everyone is doing that continuously through an entire song.

If that sounds crazy, you’re right. It’s completely nuts. It means you must memorize your music before you rehearse it, because you can’t stand at a table and read the music. It means that you must play the whole set, not just “your bells.” It means you have to be on time, every time, or not only can you not play properly, but the person you’re delivering the next module to can’t either. It’s an insane tightrope walk where anything can go wrong at any given time. It’s also the most fun I’ve ever had in my life.

For an interesting video survey of the evolution of handbell theatre, check out these links.  If you pay attention, you’ll see all the elements that I’ve talked about here, and see how they stack up and build on each other. If you notice nothing else, notice how nobody ever looks down.  Ever.

Campanile in 1990 – You’ll see part of our standup routine, plus the beginnings of choreography

Campanile in Concert (the Standup Show)

Now we’re telling stories, along the theme of dreaming.  No more wall of tables, more choreography.

Now we are acting out the story, and moving from assignment to assignment.  The full evolution of Handbell Theatre.

Evolution of choreography – two versions of the same interstitial.  One from Nocturnal Journeys, and later in Rites of Sound.  Same music.  Completely different presentation.

By now, you’re probably thinking, “This is never happening with my group.”  Maybe you’re right. But I want to encourage you to believe that it can happen. I have taught handbell theatre at several conferences, and I have successfully taken “normal” ringers and gotten them through at least one piece performing real handbell theatre.

Here’s just one example from the National Conference a few years ago. These folks got their music a couple of weeks in advance and had about 5 hours of rehearsal. Some of them did successfully get in touch with their inner rock star… and nobody is reading or looking down. For me, that’s a personal victory.

It’s mostly about the willingness to step outside your comfort zone. It’s 100% about committing to doing it. Sure, not every ringer can do it. But if you got all the way through this article, you just might be one of the ones who can!

Rima is a founding member of Campanile, an international touring company performing in 40 US states, Canada, and Asia from 1988-2006. She served as Area 12 Chair from 2010-2012 and authored the Overtones column “Burn the Box” 2010-2015.   She is currently a producer, choreographer and costume designer for North Coast Dance.