As I prepare the layout for each issue of this journal, I have found myself disheartened the last couple of years that the Events Calendar had been shrinking steadily during the time of COVID. What had once easily taken two pages, eventually dwindled down to maybe a little over a half page, mostly with listings [...]

I used to get caught up in some pretty trivial handbell things—whether all the pearl necklaces on the female ringers were the same length or if everyone was wearing the same style of black gloves. Did the music folders align from the front AND the sides?

Every two years, handbell musicians from around the world gather to make music, learn new skills, celebrate different cultures, and visit with friends, old and new.

When I founded the Mount Hope Elementary Handbells Club in 2016 ... I asked in my job interview what instruments the school owns. The then-principal said, “I think we even have handbells in the back of a closet somewhere,” I blurted out, “Oh! I play those! Let me start an after-school club!” I had no [...]

I was approached last Sunday after service by several people asking me when Tintab (my community ensemble Tintabulations) would perform there again. “We just love watching you all play! You draw us in, and we want to be up there with you.” I can’t think of a better compliment than that. It got me thinking, [...]

My first “touch” with solo handbells came in 1992 when an 83-year-old ringer in my newly-formed bell choir at church asked me for help with learning a handbell solo. What? Was I supposed to know something about that?!

Here is a piece from the AGEHR Publishing Catalog, courtesy of Handbell Musicians of America.

By Handbell Musicians of America

Following is a list of our current business members (as of August 15, 2022) along with their contact information. 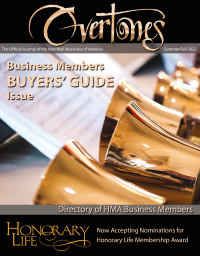