Homeless for the Holidays

I reached out to some ringers and directors and asked them: How will the 2020 holidays look for you, your family, and/or your groups this year? Will they be affected by the pandemic, and if so, how?
Some shared the changes they will experience this year.

Some shared their creative solutions to ringing during a time of social distancing, church closures, and limited audiences. Many folks are finding new ways of using technology that, a year ago, they never would have expected to be learning. Chances are, those new ways of doing things may remain commonplace even after the coronavirus is less of an issue in our lives, whenever that may be. I thank them for their responses.

From a personal standpoint, here’s how things are looking for me: I haven’t seen my mom, who is 91 and herself quarantined in a medical care facility 100 miles away, since December 2019. I haven’t been inside my home church since last March. That’s the place where I’ve experienced the true magic of Christmas, and right now it’s looking like that could be a huge hole in my holiday.

We haven’t resumed live worship and I’m not sure we will by December. Certainly there will be no singing. The church where I direct bells usually has a beautiful candlelit Lessons and Carols service the Sunday before Christmas, but that’s not going to happen this year. (The last time it was canceled was due to an ice storm many years ago.) Embellish is working on pre-recording some segments for the Symphony’s Holiday Pops concert, which will play to an audience of 500 people in an arena that normally seats thousands. Sometimes the strangeness of these times is simply overwhelming. On the other hand, it will be a Christmas to remember!

My holidays will likely be spent with my husband, as well as my daughter and her family who live two blocks away. I’ll be participating in vocal choir virtual recordings but not the in-person socially-distanced singing. And, unless numbers of cases go way down, we will not be attending Christmas Eve services in person and I have no plans to ring or direct before the end of January. Another director is leading a pick-up ensemble of people who are ready to ring now, which ended up with a three-octave group made up of members from four groups. I guess I will bake and bake and bake. I can’t wait for 2020 to be over.

Pamela Grove — Oakland, California
PL recently completed her term as President of HMA and is Artistic Director of Velocity

One of my best friends was a handbell ringer who died years ago. Her mom is like a second mom to me (she calls me daughter), and since my parents died, I have spent holidays at her house. She’s beside herself with the thought that she might not be able to host her typical “family plus handbell ringer family” gathering of 20+ people this year. So we’re developing a plan that involves measuring the front yard, using TV trays, wearing masks (of course – maybe even a contest!), ordering in some sort of dinners, and lots of Christmas lights in the trees. We’ll see if we can make it happen.

The LA Metro region held a virtual massed ring event to help folks bring handbells to Christmas. It is an HMA sponsored event and was open to ringers everywhere. Here is the link to the event webpage: http://area12.handbellmusicians.org/christmas-handbells/ which includes some background about the event. My bottom line: my community group will not have a Christmas Concert, and more than likely what would have been our eighth year of playing for our city’s Christmas event will not happen. That’s part of why I took on doing the Virtual Massed Ring event. My group is also doing some recording of ensemble pieces so that the venues where we usually play this season can use them for their patrons.

We’re hoping to have several 8-16 bell pieces, solos, Belltree and, if I keep plugging along in class, some remastered pieces for full ensemble from years past. We’ll also be doing a virtually hosted concert. It’s less schlepping but still LOTS of work.

We will not be playing as many community-based events this year. We are a church-based group and expect to be doing Christmas Eve as a virtual performance, and we will probably film our part ahead of time. The positive is that we will all get to join and enjoy our families on Christmas Eve!

Our holidays will definitely be affected. There are no handbell concerts and it looks like Christmas Eve will be outdoors so that we can sing.

Now that Gov. Sisolak in Nevada has increased gathering sizes, my school groups will be able to perform for a live audience. We will also record our pieces for use in a livestreamed event. My church group is a small ensemble that will most likely be able to play at the Christmas services. My family will have a quieter Christmas celebration this year with no big gathering.

My bell choir is rehearsing weekly. We have recorded one song and have two more to record before Thanksgiving. I think we are being more involved, but the fact that it all has to be pre-recorded allows us to do more for the services. It’s my habit to go away at Christmas, but I’m not doing that this year, so I’m able to do more for the services, which is a plus. My mom is going to my sister’s for Christmas, but nobody else is. She usually has 18 people for Christmas Eve dinner.

Our church is planning to continue virtual worship through at least the end of the year. We have a rough outline of services, and are working bells in occasionally, though it’s mostly me doing solo work or adding descants in post-production. Depending on the epidemiological curve in our area, and how we progress through reopening phases, I may get a small ensemble together to record something for Christmas Eve. Emerald City Ringers is recording a piece in a physically-distanced setup. We have four recording sessions, mostly with different ringers each time. The piece will be released on social media in late November or early December.

Tintab is a bit smaller right now, so we’re playing 2–3 octave music. We will be doing three recording sessions and plan on doing a livestream concert as well. The Reno Philharmonic Orchestra has asked us to continue to be a part of their Spirit of the Season concert, albeit virtually. The plan is to record a couple of solo pieces and then a piece with bells and strings. We have had a couple of entities request bookings for live concerts, but we have not yet made a decision on those.

Mosaic is recording pieces as we go, to offer them to our venues. We might perform outside, we’ve done it before. I just received an update from one of our venues, a retirement community; they will be doing a recorded concert in-house with no residents in the concert hall, with mics and cameras, and broadcasting it throughout the facility. We can do that!! 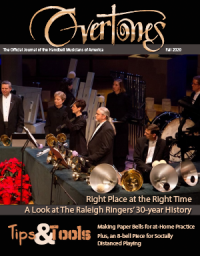 2020: A Year of Accomplishments

Long-lasting Impact of the Pandemic

HMA in the Time of Pandemic

I Never Thought I Could

A Joyful Day
Supplemental piece to the

Jesus Shall Reign
with

Got Bells?
Make Your Own Paper Bells for At-Home and Online Practice

Homeless for the Holidays
How is a COVID Christmas looking for you?