The Thing about Handbells

Ever since sustaining an injury five years ago, I have had a particular kind of neck pain flare up anytime I would drive a long distance, sit in a side section of a theater where I would have to look to one side for a period of time, or ring handbells.

I attributed it to the act of holding my arms out front for a long time—holding the steering wheel or ringing bells—or having to hold my head in an odd position for a long time. Sometimes the pain would be unbearable, making ringing something to dread. I figured my ringing days were pretty much over.

In the last year, however, I’ve noticed that the pain flares up only very occasionally and is not as bad as it used to be. I started thinking maybe I ought to get my bells out and try a few solos, just to see how I could do. Coincidentally, the director of the community group in which I used to play recently contacted me and said she was desperate for someone to ring and would I please consider it. I told her I had been thinking of trying it again and that I would consider it. I told her I couldn’t guarantee anything, however, and if it started bothering my neck, I wouldn’t be able to continue.

I’m anxious to give it a try; rehearsals start in a couple of weeks. I asked to look at the music early, since I would be playing a part I wasn’t used to (actually, I’ve not been used to ANY part a few years). As I looked over the music and heard it in my mind, I started to remember the things I love about playing them. Then I recalled an editorial I wrote when I first started this job about that very thing. Following is a portion of that article:

When I discovered handbells, I knew there was something special about them, but I couldn’t put my finger on exactly what it was. I loved the sound, of course, but I can say that about many instruments. I also appreciated the beauty, craftsmanship, and simplicity of the instrument itself. But it wasn’t until attending my first massed ringing event that I realized what it is that sets handbell ringers apart from other musicians – that is our unique ability, willingness, and even desire to be one small part of not just a single ensemble but of a single instrument.

Having played in the school band, sung in choir, and performed in theater troupes, I already had an appreciation for being part of an ensemble. Anyone who has ever participated in a late-night jam session, or experienced the reverberation caused by a perfectly synchronized cutoff on the last note of Joyful, Joyful, or even been in the middle of a wave at a large football stadium knows what being part of an ensemble is all about. There is a power that comes not just from within oneself but from the group as a whole, which needs to be experienced to be fully understood.

Try doing a wave by yourself or performing just one part of a classic choral work. But even in an ensemble, sometimes it can be all too easy to become so wrapped up in your own instrument or so in tune to your own voice, that you can perform well but still become detached from the group. Not so with handbells. When ringing in a handbell choir, true musicality is only achieved when every ringer in the ensemble reaches a point where the only individuality is that of the entire group.

That is truly an awesome feeling. But when you reach that same level of collectivity in an ensemble of 800 other ringers, then it becomes an experience beyond explanation. Sometimes, when trying to get a non-ringer interested in trying the instrument, one concern I hear is that it seems it would not be much fun ringing “only a couple of bells.” When I try to explain the almost spiritual experience of communicating as one voice with an entire ensemble playing just one instrument, then I’m often answered with just silence and perhaps and odd look. Until I get someone to actually try the instrument and experience that feeling for himself, the only thing I can really say is, “It’s a handbell thing.” 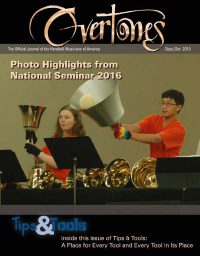 It’s a Celebration!
Having just returned from the National Seminar in Rochester, New York, I am continually amazed at how much our organization a) unites people through music, b) touches people’s lives, c) pushes the envelope in creativity, and d) is dedicated to encouraging and developing our future.

All the Difference
Part 1: Keeping Your Program Strong Through Differentiated Instruction

A Place for Every Tool and Every Tool in Its Place
I’ve been involved in a number of handbell ensembles across a number of states over the years. Everyone has a different method of storage for the plethora of goodies that go along with the basic handbell instrument. Recently, I got tired of lugging around the cumbersome, oversized plastic tub with wheels in and out of [...]

If Not Me, then Who?
As I listened to all the exciting upcoming events Jenny described at the National Seminar opening banquet, I found myself mentally reviewing my personal calendar and thinking about which events I could attend and which ones I couldn’t.

International Symposium 2016
The 17th International Handbell Symposium just finished in Vancouver, Canada. Over 750 handbell musicians from around the world gathered there to unite across the boundaries of nationality and language through the music of handbells.

Whatever You Are, Be a Good One
I love a good quote. I love to collect quotes and post them in meaningful, strategic places in my office and around my home. I am drawn to quotes that urge me to be better than I am or to be more mindful of how I interact with others; to be more passionate and more [...]

The Thing about Handbells