The Power of What We Do 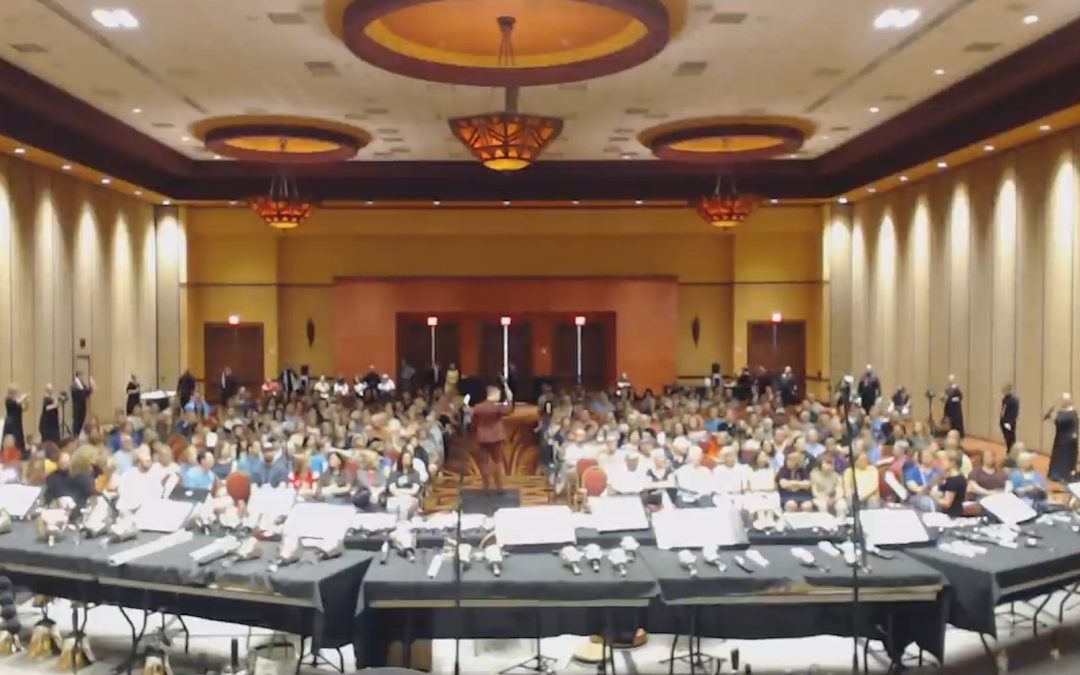 Hillary Marotta has played handbells for over 30 years. She studied both ringing and conducting under Dr. William A. Payn and looks forward to directing a choir of her own. Her most recent book, Playing My Heart Out: One Ringer’s Passion for Handbells can be purchased on Amazon. She resides in Hershey, PA, with her husband, daughters, and adorable golden doodle, Teddy.

Music … can name the unnameable and communicate the unknowable. –Leonard Bernstein

If you were able to attend National Seminar in Glendale this year, you were one of the 250+ people who experienced many special moments, including the feeling that the event became its own family reunion of sorts. With everything on in-person hiatus last year due to Covid, coming together physically was that much more meaningful. The smiles, the hugs, and the human connection that had been so missed and so hoped for gave a revitalized energy to each and every moment. We could feel the anticipation of being able to physically pick up bells and play music in real time together, the excitement bubbling over thinking about what music might be made. And the opportunity to watch and listen to live, real-time performances was more than just welcomed. It was the deeply pined for salve for our hurting musical souls who had been without the magic of live music for so long.

I was able to find meaning in all of it. I loved it all, even when my feet were tired, my back was aching, and the notes were beginning to swim on the page. Ringing for Conducting Masterclass for 3.5 days straight wasn’t a chore but a privilege. Helping people find their way and answers to their questions was my pleasure, and watching 22 teenage ringers work through challenging music and put on a fantastic concert together (not to mention have a lot of fun!) was an opportunity for which I will be forever grateful. But right as the event concluded and the last concert of Seminar was ending, I had an absolute pinnacle moment of magic, one of the moments I became a musician for, one of the moments that brings me back to handbells time and time again and reminds me how extraordinary music can be.

On the last evening of Seminar, Bells of the Cascades and the Cathedral Bells of Orange, CA, played a combined concert. With Matthew Compton and Alex Guebert sharing the podium, the entire concert was beautiful and extremely well-received. I believe everyone had expected to be wowed, and they were. However, I don’t think anyone expected the moment of incredible ethereal bliss that ended their concert. While coming to the close of Matt Compton’s Lumen Fidie, the ringers slowly recessed from the stage and surrounded the audience, still playing. They impeccably and precisely played each note Mr. Compton was conducting while placing themselves strategically around the room, causing the audience to turn and watch, feeling completely enveloped by the music. As they rang, one at a time several other ‘ringer’ ringers in the audience slowly stood and joined in. The lights dimmed. Mr. Compton turned toward the audience and stepped onto a higher platform to conduct. Both the audience ringers and the choirs played for what seemed like a heavenly, endless few minutes. Even in the midst of those few minutes, I knew I was experiencing something magical. Just as slowly as they had joined, the audience ringers stopped playing and sat down one by one, and the music was left to the the choirs alone. Their sound slowly faded away and not a single person, ringer or audience member, moved a muscle. The entirety of it all became a musical moment forever etched in my memory.

What made that musical moment so enthralling was the raw emotion the piece evoked in each one of us. As I wrote in my recent book, Playing My Heart Out: One Ringer’s Passion for Handbells, I am one of the lucky people who music deeply touches. There are notes and chords that evoke a strong emotional reaction from deep within my soul. That reaction is completely involuntary and uncontrollable. There’s no current biological or neurological explanation for this phenomenon. It is innate and undeniable. While it is also true that a connection to a previous musical memory or memory of a time attached to a particular piece of music can also elicit an emotional response in so many of us, this was not one of those times, at least for me. This was the first time I had ever heard this piece. To my head and heart, it was the first time I heard these particular notes in this particular order. To me, it was brand new music that tugged at something so deep within me that it moved to tears. As I looked around the room at the beauty of the ringing, the connections I had to the people ringing, I absorbed the glorious sound. The familiar knot formed in my throat, my lip began to quiver, and eyes welled. The tears spilled over and the emotions ran so strong that at the conclusion of the piece, I could have sat for several minutes doing the ugly cry simply from the raw beauty of every part of it. (Even recalling the memory now makes it difficult to write through the blur of the tears.)

What’s most important is that I wasn’t the only one. This same uncontrollable, inherent reaction was touching many others in the audience. As with so many experiences in our musical community, we all felt the magic, the irrefutable connection to the notes and how they are played that brings forth such a beautiful reaction from within us. We are the lucky ones. And this is the reason why do what we do – why we pour hours of rehearsal and travel and money into handbells. It’s why we keep going when it’s challenging, why we don’t quit when we’re tired, and why we geek out over a handful of plastic and metal and bronze. We know that these moments exist, that they are rare, and that are special. Much as I guess a mountain climber would feel summiting a peak, we as musicians feel the ultimate culmination of our work when we can convey a moment like this to our audiences. Show of emotion means we have done our job in the fullest way possible. It’s why we continue to come together for this passion of ours, no matter how many times other people have never heard of our instrument or think we’re saying handball and not handbells. Sharing this connection we feel so deeply to music and the appreciation of the power that music has over us is the reason we want the world to know our passion. It is the reason we love handbells. 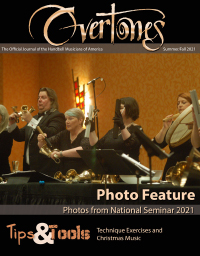 Coming in the New Year

Reunited, and It Feels So Good

Who Can “Grant” Your Wishes?
Special grant helps a school discover ringing amid continuing pandemic